On Saturday morning, far too early, Dave and I bundled into his car and drove through the dark Yorkshire Dales to Hawes, for the start of the Y3P Ultra. I did the race last year, but this was the first time for Dave to run something this long, though he has completed a couple of ultra races in the past. This year the race had a nice twist, if you finished the 70km course in under fifteen hours, you could then do an out and back track over Great Shunner Fell and round the whole effort up to 100km. We weren't sure that we wanted to do the extra miles, but we reckoned that we'd be able to make that choice when we got back. Last year I finished a minute after midnight, so finishing before should be easy enough.

The route starts by rising steeply out of Hawes up towards Dodd Fell and then picking up a track around the west of the fell that eventually joins a road/farm track that drops down to Ribblehead. After five miles, at the junction of the tracks, we stopped for a couple of minutes at the first checkpoint. We were already near the back, but we were feeling strong and in good spirits. We made good time on the long drop down to Ribblehead, but were overtaken by another couple who were steaming ahead at a great pace.

After the second checkpoint at Ribblehead, (bearing in mind we'd just crossed Dodd Fell) we started our way up the first of the Yorkshire Three Peaks, Whernside. We walked fairly fast, not pausing at all on the way up the mountain. We met up with the couple who'd overtaken us an hour or so earlier, only to see them vanish off down the path when we stopped at the summit to get some stuff out of our backpacks.

The appalling track down Whernside has been repaired and while it wasn't a pleasure dropping down the steep stones at the top, it was a lot better than it was the last time I was there. I didn't fall on my bum at all! Previously, I've been so traumatised coming down the top of that path that I couldn't even dream of running lower down, but this time I managed a moderately respectable (if not elegant) shuffle.

We jogged down into the valley and made our way to the road, where the next checkpoint awaited. We'd already been told by family member's that Dave's satellite tracker wasn't working and at the checkpoint, we discovered that mine had failed, too. We wasted a bit of time while the marshalls poked and prodded the boxes that were taped to our pack straps, but they couldn't get them working. The team weren't particularly worried about our safety as we were running together, so they allowed us to carry on, even though - technically - no one would know where we were.

The climb up Ingleborough is deceptive; it starts slow and gentle a nice meander over grass between some attractive limestone pavement, then boom! It turns into a beast, heading uphill at a most unnecessary gradient. Somewhere on the lower slopes, we leapfrogged the couple we'd already seen a few times - they overtook us at the next checkpoint. On the really steep bit, we had to step off the path to allow a couple of guys to overtake us, they were walkers doing the three peaks challenge and were moving very fast indeed.

The summit of Ingleborough, at about 21 miles in more or less marks the halfway point of the route. We paused for a photo and then headed off down to Horton in Ribblesdale. I don't know what it is about this bit, but it always seems far longer than it should. It's all downhill, but the path was alternately rocky and muddy and always wet, so it was hard to run much of it at any pace. There were points where locomotion was more akin to ice-skating than anything else. Mud on top of limestone isn't fun. On the way down, we overtook the two guys that we'd seen steaming ahead of us on the ascent. They were celebrating finishing their three peaks challenge by swigging from a bottle of champagne. Way to go!

It was drizzling fairly hard by the time we reached the checkpoint at Horton in Ribblesdale. We were very grateful for the marshalls who provided us with hot coffee (four sugars, please) and cold pizza while we dug out hats, gloves and head torches.

Off we headed up Pen Y Ghent, the last of the three peaks. I really like this one, it feels like a real mountain with some serious scrambling just as you reach the top. The scrambling is even more exciting if you reach it just as daylight fails and you have to do it by torchlight. On the top, we were caught up by the couple we'd been seeing all day and we made our way down into the valley together, where we caught up with another participant in our race who was having some navigation problems.

I've no idea what the stretch of the Pennine Way from Horton to Cam End looks like. I've covered it twice, but both times were in the dark. The path was very damp in parts, but we made fairly good progress. For about four miles or so, we went along as a group of five, with Dave and I setting the pace at the front. However, with about ten miles to go, we realised that the others were falling back and by the time we had climbed back up to the checkpoint at Cam End (peak number five of three) they were out of sight behind us.

This is the point that I really start to enjoy ultras. At about forty miles in, when my body is very tired, but I can set a tempo and walk hard or jog for miles. It's hard to describe the feeling - stupid might be a good word - but it is immensely satisfying. Admittedly, it is harder to move fast in the dark, on rocky and muddy terrain, but the satisfaction was there. Dave, on the other hand, didn't enjoy this bit very much. For most of the day, he had been much stronger than me and could have moved a lot quicker, but he was merciful to the old man. In the latter stages, he struggled. Whether it is just that, being older, I'm better at coping with aches and pains, I don't know. Overall, I think we got the balance of pace about right, for the two of us and our different strengths.

The descent down into Hawes was a bit miserable; the ground was wetter and slippier than either of us remembered from the way out and I spent a significant part of it on my rear end. Dropping through the village of Gayle, I pointed out to Dave where a friend (and ex-boss) of mine lived, serendipitously, that friend drove past a couple of minutes later and stopped to say hello. We were too tired to be very sociable, so I made a hasty goodbye and we headed back to Hawes, running a defiant last hundred meters in the syle of Eliud Kipchoge.

Disappointingly, we arrived back well after midnight, which ruled out the possibility of us doing the extra 30km, had we been so inclined (we weren't). 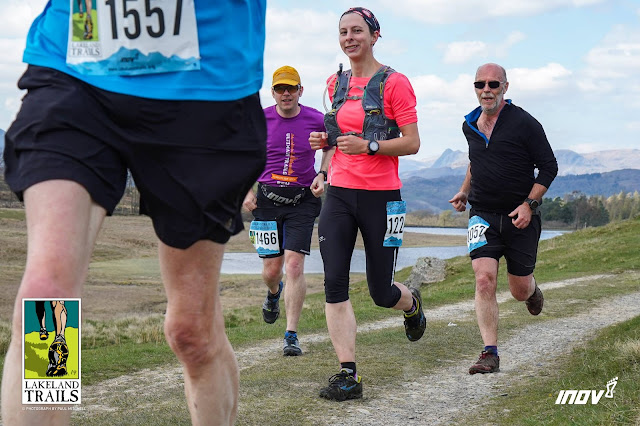 When It All Goes Horribly Wrong

This Saturday, I was due to run the Lakeland Trails  Hawkshead Challenge. At just over ten miles, it is shorter than most races I do, but I was hoping that going a bit faster than usual would be good for me. Another advantage was that my son and daughter-in-law, Dave and Lina would be running. Dave, Lina and I about three miles in. It was great to meet up with a few folks from the facebook #run1000miles2019 group at the start. The route starts with a steep climb up out of Hawkshead and Dave and Lina soon dropped me, but I caught up again on the flat section along the ridge. We dropped down to the water station at Sawrey together and climbed up the steep section together before the technical (steep and rocky) descent to the lake. All three of us like fast descents and Dave and Lina bounded off like scalded mountain goats.  I was stuck behind other runners and couldn't keep up. however, the path soon widened out and was able to start to move faster. Boom! I tri 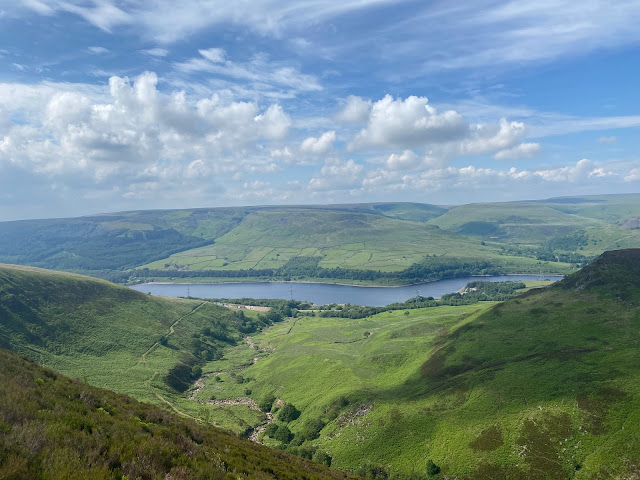 33 Hours in the Pennines, or How I didn't Finish A Race

A couple of weeks ago, I wrote a post about my upcoming Spine Challenger race and mentioned that my main aim was to finish. Well, judged by that fairly simple standard, I failed. I didn't get to the end, in fact I barely managed to get two thirds of the way along the route before a very sore back brought my jaunt to a premature halt.  Looking back on the event with a few days of hindsight, it was far harder than I expected, but it was also very enjoyable at points. In this post, I'd like to give a brief overview of what actually happened and then I'll add another post which looks at some of the lessons I learned on the way. Sometime around 11 pm on Saturday, I was slogging my way up White Hill in the dark. I'd never been there before, I didn't really have much of a clue where I was, but it was great fun. I love being on the hills on my own and there is something really special about being out at night. Three hours or so later, I was dropping down into Hebden Brid 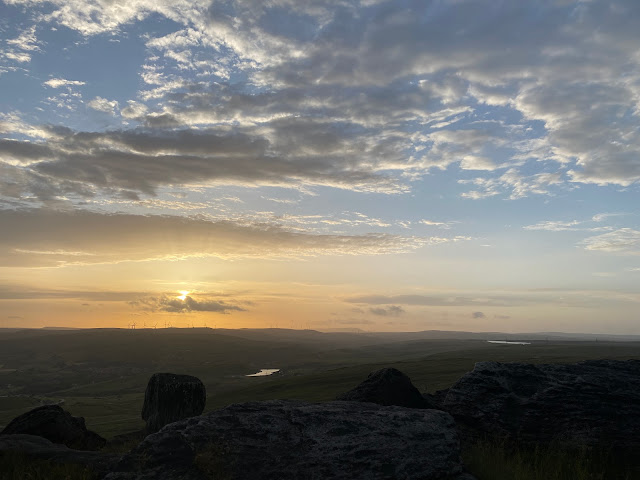 So, I didn't finish again. I'm gutted, upset and frustrated beyond measure. I've thought about the Pennine Way since my brother, Phil, walked it in the late 1960s. When I heard about the Spine Race, I was absolutely fascinated and the 108 mile Summer Spine Challenger sounded perfect to me. I trained hard for the Sumer 2020 version, only to have it cancelled because of the pandemic, last year, with a limited opportunity to recce the course, I had to pull out with really painful back that left me barely able to walk. So, this year, I worked hard to address my back problems; I strengthened my glutes, keep my hamstrings stretched, did all sorts of core exercises and pilates stuff. Yes, you can always do more, but I worked hard and baring a couple of doses of a bad virus in the spring, I reckoned that I was ready. But yet again, I had to pull out with a back problem; though I manage to get 10-15 miles further than last go. If I keep this up, I should manage to finish in 2024! E